Join the forum, it's quick and easy
UK Fishing Forums
If you haven't posted today why not log in and let us know what you've been up to

Welcome to UKFF
UK Fishing Forums
Would you like to react to this message? Create an account in a few clicks or log in to continue.

So do i and i too mopped up on glide baits :)

love the smutleys ive a few in 4,5, and six inch 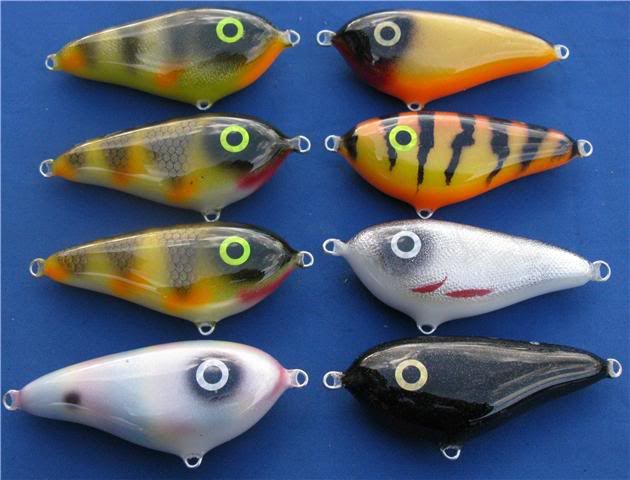 the bottom four are mine 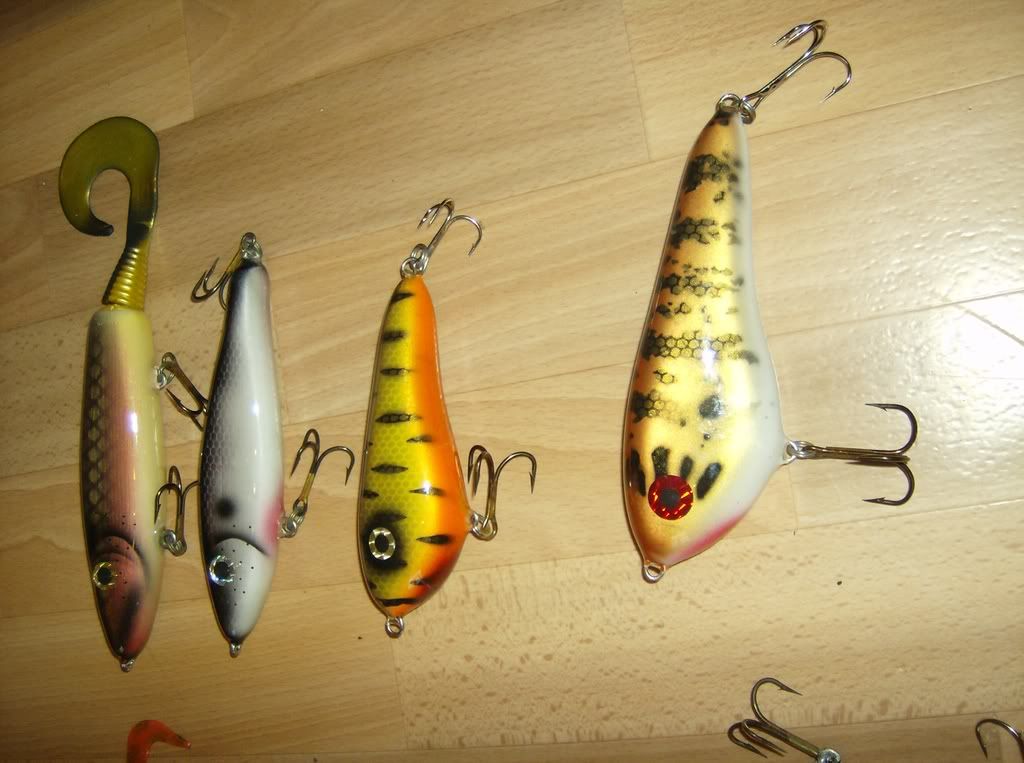 Woodchucker wrote:Just received a Jerkbait from Graham Slater probably not a name most of you have heard of, apart from possibly Danny

I have to say that its top class, a mix of glide and flipper, deadly on the right water

took copper tiger hector for a walk on a very hard pike water .....these fish have seen every lure known to man , and they ignore them usually . Hector got nailed second cast and third cast ..... the idiot at the other end of the rod failed to set the hooks both times

a very slow sink with a lovely shimmy and glides with just the slightest tap of the rod tip . bought a perch pattern , i was so impressed with copper tiger

the hector hooks well doesnt it you wouldnt beleive the sizr of the thing i hooked with it...

forget all this 30lb, or 40 inch nonsense

just shy of six foot, and 16 stone and ill be buggered if i know how i managed to hook my forearm just below the elbow 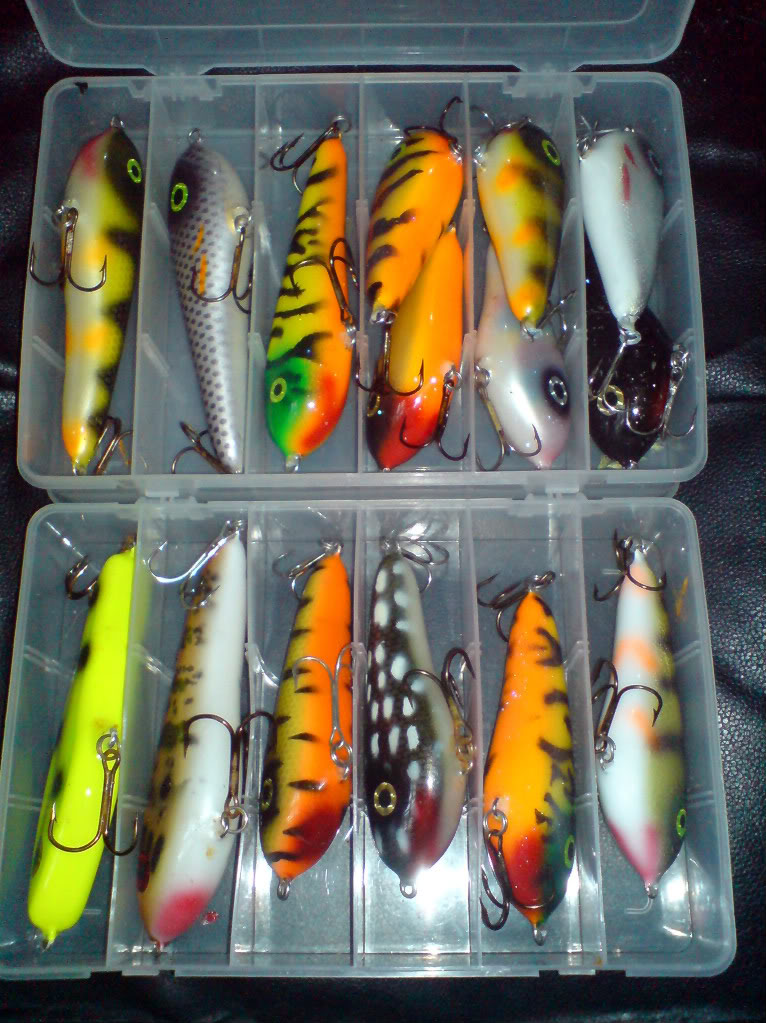 Bloody hell John, have you bought all of Chico's Stock

Not eneough tooth marks for my liking

they dont puncture or scar easily. ok there are a couple that have never been cast yet as they only arrived on frida and this morning and ive not been out since
middle three in top box and bottom two on the right
if i gave you those and say one of the original 5 inch ones i had you would be hard pushed to tell the difference, in fact the nly one that is showing any real signs of wear is the blaack one and i suspect that is down to the colour showing blemishes up in the finish more

how do the snax hold up?

i need to spend more time and money at
chicoslures.co.uk

The best way to spend your time is to spend time in a swim learning the art of jerkbait fishing, you can catch on a F#x jerkbait straight out of the box if you learn how to use it.
_________________
Red Hot Chilli Piker

Woodchucker wrote:The best way to spend your time is to spend time in a swim learning the art of jerkbait fishing, you can catch on a F#x jerkbait straight out of the box if you learn how to use it.

when they work as they should

fox do do some decent lures but they are let down by silly things like floaters sinking and sinkers floating...
not so bad if you know what your doing but if your new at teh game its gonna cause you some grief,
just think johhny pops to his canal with his lovely new fox jerkmaster and a box of pacemakers trojans warriors

and the pacemaker floats the the trojan flips and keeps coming in upside down, and the warrior (supposed to go to what 15 feet or so) only gets down two feet. i would think it was me doing something wrong, as i did with all of the above when i got them

I have a bright yellow dolphin which sinks pretty well and I remember that it was the first jerkbait I owned, the first time I fished it next to a mate of mine (He was using Cobbs Countdowns) I was amazed how crap my new lure was, but I had a 4-5 week period of using it and by god did it catch me some good fish, its a flipper bait (No pun intended) and works well with a quick aggresive jerk of the rod tip, then allow to settle and repeat the process, it has caught on rivers, lochs and even canals

to be honest without fox lures and the ace ones as well i probably wouldnt have got into lure fishing as much as i have or at all.

i only started when the livebait ban began in the lakes and i bought a half price baitcaster (20 quid) i had a smallins multi (penn 940) from throwing seastuff then i bought some lures a few twin tails and grubs with some jig heads . 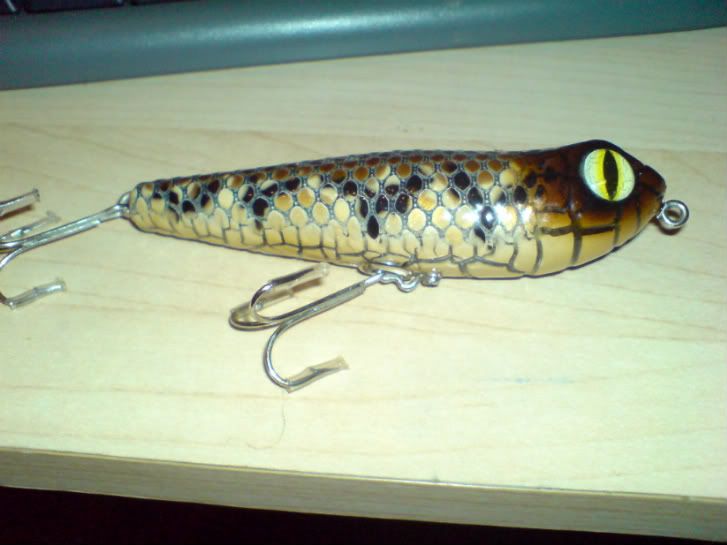 why is the board in french????

i could get into thes japanese lures, not to mention some of the US custom stuff
you know ive been giving swimbaits the once over lately

how much do they cost though im still tempted