Plumbing up your float

Plumbing up your float

Plumbing the depth / Plumbing up your float.. seems to confuse
a lot of novice anglers. Once you understand the principles, with
a little practice it becomes second nature and will make you catch rate rise.


The idea is that you set up your float rig as normal float on top hook at the bottom then attach a plummet or
weight to the hook. Then have a guess at the depth and cast out to where
you want to fish. When setting up the rig to plumb the depth I
just do not shot the float at all.
This means that the float will be extra buoyant so it will try and
fight it's way to the surface. This will helps during plumbing.

The picture above shows the "cork" or "dumbbell" type plummet.
The hook and line ate passed through the top eye of the plummet and
the hook point hooked into the cork / foam at the bottom.

The hook hold is very secure and rarely comes of in casting.

The picture below shows the "clip" plummet. The two
tags are pressed down and the clip opens up like a jaw. The
tags are released and a spring keeps the jaws closed, grasping the
hook.

This type of plummet is OK for plumbing the depth close in, but
can fly off during vigorous casting. 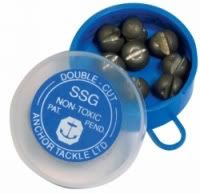 This is the one i tend to use


With this method a large split shot, which should be big enough
to sink the float, is attached to the line just above the hook.
I normally use a AA or SSG (swan shot).

simple sum up..
If you find the float does not rise to the surface then the rig is to
shallow.

The float needs to be moved further up the line, away
from the hook and try again.

If the float lies flat on the
surface, then the rig is set to deep.

Move the float further
down the line towards the hook and try again.

I know it sounds so simple but get it right and your catch rate should go up..