When fishing rivers and streams trotting is a common method of float fishing. Trotting is allowing the current to carry the float and bait downstream. 2 methods below cover fast and slow moving flows

This type of fishing requires a different approach to stillwater fishing where the float is cast out overhead. A stick float rig needs to be cast, from one side. This can prove a problem, but not if you have set your rig up correctly if you over head cast you will end up with a tangle.

This is good for the smaller fish or if you have no snags as a light line of about 3lb is better for this method. The best type of float to use when fishing slow rivers and streams is a carbon stemmed stick float as these are nice and light.

It needs to be attached to the line using rubbers I use 3 one at the top and twoo on the stem. Now for shotting shot needs to be equally spaced down the line, Pairs of No8 or No6 shot are ideal. Then forr the last 2 or 3 I use just one shot so it drifts about naturally as it comes through the swim. Simple

This is my favored method and tend to use it more than the stick float as I like to use tougher line and Im normally after chub that will smash 3 lb line to bits. We use a bigger float as we need a lot of lead down the line to ensure that the bait is pushed down to the bottom right where the fish are. This time I use 6lb line as before attach it to the mainline using three rubbers better than 2 and if one snaps you still have your float. Shotting a chubber float I use a string of large shot BBs or AAs placed around 1ft from the hook, super simple rig catches a shed load of chub. 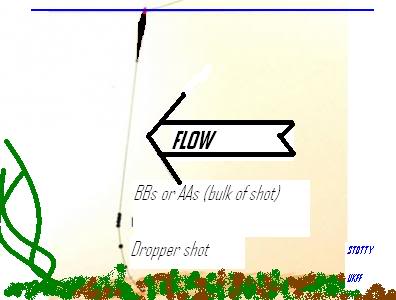 Totting, my favourite method on rivers. I've had some cracking days with the stick float, if you haven't had a go at it yet, give it a go, you'll love it. Great post Stotty.

Another informative post, arming the members with invaluable tips and tricks to help them catch more fish

We just need to get out and fish

i,m sure you,ve go plenty more to help us out with, if not we are all doomed 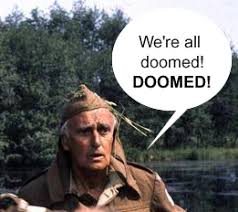 i,m sure you,ve go plenty more to help us out with, if not we are all doomed

i,m glad you did,nt come across a condom in your pocket

that could have been another story....

NIDGE MAC wrote:i,m glad you did,nt come across a condom in your pocket

that could have been another story....

great write up paul ,i can't wait to get moved by the river i will putting that post to the test ,will obviously let you know how i fair ,am gonna use this week while i'm laid up to find as much info as i can on the stretch ,so i'm ready for it