- UK
The wels catfish was introduced into the UK more than one hundred years ago by the Duke of Bedford who stocked them into his now famous lakes at Woburn Abbey in Bedfordshire. We still consider wels catfish as rarities in Britain, although their distribution is increasing every year and there are now catfish waters in nearly every county in England. The majority of the UK waters are within 40 miles of Woburn Abbey, as they have gradually spread from the original stocking point

- Continent
The wels catfish is originally from the eastern countries in Europe and originate no further west than Germany. Many of the best catfish locations in Europe (we know about) have resulted from introductions in the last 25 years; Italy, Spain and France all have established populations in some major rivers.
One of the primary reasons for this is that catfish thrive on good summer temperatures coupled with an abundance of food and low levels of commercial fishing. The western European countries have great climates and food stocks, but do not suffer the commercial fishing pressure that affects most Eastern European rivers, where catfish are an important food resource.

Germany has many fine catfish waters including the Rhine, Donau, Neckar, Main and Naab. Although cats are relatively new in Spain, some of the biggest fish in Western Europe reside in the Rio Ebro and its tributaries the Segre and Cinca. The mighty River Po drains much of northern Italy and has a thriving population of huge catfish that have been caught close to 90 Kg. The smaller River Mincio too has a good head of catfish. Few anglers venture into Eastern Europe where commercial fishing is rife but this is where wels catfish are indigenous and with a lot of research and perseverance good catfishing can be found. Large catfish exist in the Rivers Volga, Ural, Dneiper and Don in Russia, The Danube in Hungary, and Romania, and the huge Vranov Reservoir system in The Czech Republic. Kazakhstan in Asia introduced catfish in the mid 20th century and these have now attained huge proportions with fish of over 100kg captured every season. Life's just too short for the avid cat fisher!

The wels, like most very large fish, has a tremendous growth rate, especially where there is an abundance of available food. The fry are said to feed on insect larvae, tadpoles, tubifex worms and other invertebrates, before moving on to larger food items such as fish, mussels, crayfish, leeches, worms and even small birds and mammals. Prey is detected by both smell and vibration. European catfish possesses a well developed 'weberian apparatus'; a type of bone in the back of the head which helps amplify sound and vibration (a tethered livebait for instance). Although live fish make up a good proportion of the catfish's diet, they are primarily scavengers and will eat just about anything.

Water temperature has a large bearing on growth rates; this is especially noticeable in countries that have long hot summers such as those in central and southern Europe. In Spain for example, catfish were first stocked into the River Ebro system, as small fish in 1978, there are now plenty of 40-60 kg fish being caught with a best of over 75kg There are almost certainly 100 kg fish swimming in this river - all within twenty years of its original stocking! In warm water research centres in Germany, wels have been reared to more than 32 kg in only five years, a rate only matched by the giant South American fish; Arapaima gigas.

During spring and early summer, where the water temperature reaches a constant
20 0 c. catfish spawn. A 'nest' is made within the confines of tree roots such as willow or alder and underwater vegetation is also used. The female is said to produce up to 100,000 sticky eggs about 3 mm. in diameter, these will hatch in less than five days. The fast growing fry are attended by the males until large enough to fend for themselves; only 10% of the fry are likely to survive.

In the UK the growth rates can vary dramatically, excluding very short term weight gains, growth rates of 1-2lbs a year would be average, 3-4lbs a year above average and over 4lbs a year excellent.

Impact on other species

The wels catfish, although predatory has no detrimental impact on other species of fish in UK waters. Evidence is in the form of analysis of every water in which catfish are present in the UK. In no water have catfish overpopulated, in no venue have other species been significantly impacted.
Catfish are a positive help in fisheries in control of sick/dead fish and have the advantage of preying on crayfish, so in waters plagued by crayfish catfish can help keep them under control. 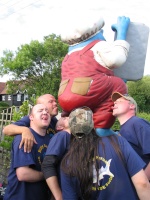 This is what i like to see,,we could do wi a write up like this for more species...Well done russ...